A friend is a person attached to another by feelings of affection or personal regard. This is an interesting perspective on friendship. I didn't really see a friend as someone we are attached to until I read this definition, but it really is true. We gravitate towards our friends. When we are in a grocery store, we pass many strangers and we don't even give them a second glance, however if our friend is shopping we walk right up to them and start talking. We will drop what we are doing to make time for them. We will make sacrifices for our friends as well. The closer the friend the more we are willing to sacrifice. If an acquaintance asked me if I could watch their children for an entire weekend, I would probably say no. Most likely I have not even met their children yet if they are an acquaintance and would I put myself in that position, no. Now on the other hand if my best friend asked me to watch her children for a weekend I would probably say yes unless I already had made another commitment for the same weekend. Most likely, I have spent a great deal of time with them and their children and I would know exactly what I was agreeing to. 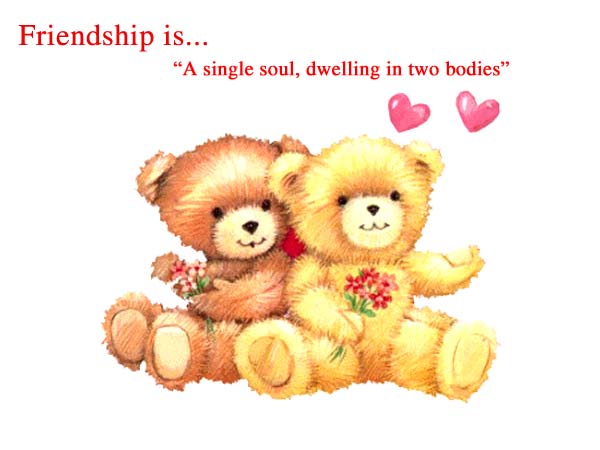 Some say friendship is "a single soul, dwelling in two bodies", as wonderful as this saying is, do you believe this is a true statement? There are very few people in my lifetime that would even come close to this level of friendship, however if I don't take the saying literally and look at the sentiment behind it, I would say quite a few people would fit into that category. The sentiment of this saying, for me, is two people who see the world in the same way. They have a similar belief structure, similar moral code and agree on most things. I know some people never really reach this level of friendship with each other. Typically, in this day and age a friend is someone we chat to on facebook or see at work. Not a whole lot of depth there. I have found that the times I have found myself having these deeper connections has been with other Christians. We have something that we fundamentally share deep down in our souls and spirits, our relationship with God and it brings us together in a very unique way. Do not get me wrong I have had great friendships with people who were not Christians but it just never reached the same depth. Am I saying that two non-Christians could not reach the same depth, no. I am saying that it is a unique connection that we as Christians have because we are not just connected to each other we are connected to God as well. "'For where two or three come together in my name, there am I with them.'" - Matthew 18:20

How does God define friendship? John 15:12-17 says "My command is this: Love each other as I have loved you. Greater love has no one than this, that he lay down his life for his friends. You are my friends if you do what I command. I no longer call you servants, because a servant does not know his master’s business. Instead, I have called you friends, for everything that I learned from my Father I have made known to you. You did not choose me, but I chose you and appointed you to go and bear fruit—fruit that will last. Then the Father will give you whatever you ask in my name. This is my command: Love each other." Jesus said we are his friends if we do what he commands us to do.